Moss will recur if the growing conditions are not changed. Killing moss is not a one time operation. Moss stultifies other plants. 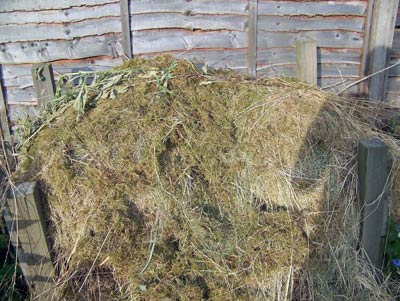 Readers Question: Is it OK to Compost Moss?

‘I have just been raking a lot of moss from my lawn. It’s surprising how much moss I was able to rake off and naturally I would like to compost it.’ Then I want to cure the problem.

Like any organic matter, moss will compost down and make compost over time but it may take a long time!. However composting is not a good cure and I would avoid putting it on my heap for fear of spreading the moss around.

I would dig a hole under my runner bean trench and bury the moss at least 12″ deep.

One trick, as with any composting is to mix it with other materials, such as grass clippings and woodier plant stems. If mixed together the moss should compost downÂ  depending on how well watered and aerated the compost heap is. Moss grows from spores and it is possible they will not be killed by the heat in your compost bin.

Other uses for moss include lining the inside of hanging baskets. These days, artificial linings are used, but, moss has many properties including water retention which make it excellent for lining an hanging basket Help with Problems & Cures for Moss

Cutting the supply of water through better drainage.
Increasing direct sunlight.
Increasing the soil pH with the application of lime.
Regular hoeing and disturbing the soil around the moss with a rake
Application of chemicals such as ferrous sulfate (e.g. in lawns) or bleach (e.g. on solid surfaces).
Encourage and help competitive plants like grasses.
Top dress plants in containers with sand, gravel, and rock chips for faster drainage to discourage moss growth.
Chemicals products containing ferrous sulfate or ferrous ammonium sulfate will kill moss. Moss Gardening: Including Lichens, Liverworts and Other Miniatures by George Schenk

One thought on “Help Control Moss”