If you want to help yourÂ  Rhubarb water it even when it is raining! 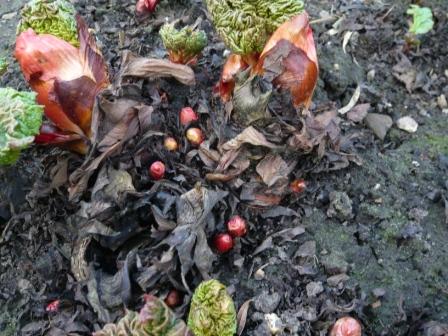 The crown of the plant is the top of the root system where the stalks shoot from. Under the crown will be a thick root r rhizome with finer hairs to take up the nutrients from the soil. Because it produces a large crop it needs feeding with good compost or farmyard manure when planted and then as a mulch every spring and autumn.

My last post alluded to the green shoots of economic recovery, well all I can now say is Rhubarb Rhubarb. This is a clump of my Rhubarb waiting to joins other stalks in a crumble or pie.