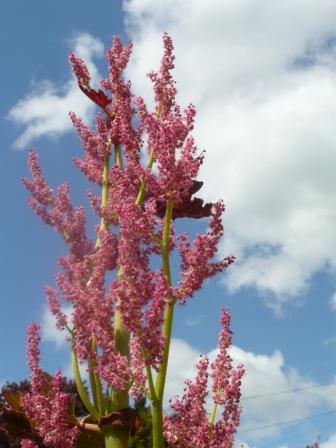 This sculptural plant has tall ‘frothy’ flower stalks pretty much like your Rhubarb when it runs to flower. Not surprising because Rhubarb is a variety of Rheum. Rheum palmatum ‘Atrosanguineum’ has very large leaves with a red underside and a rosey glow throughout the plant. They like plenty of humus in the soil.

Rheum Palmatum and Rheum Ace of Hearts are other herbaceous perennial varieties. Palmatum has large palm like dark green leaves that are purple-red beneath and creamy green to deep red flowers. It grows up to 7-8 feet and spreads 6 feet. Ace of Hearts has large heart shaped leaves.

This plant is grown on a steep slope so it can be viewed from underneath or above. The ground is moist most of the year so the rhizome is kept moist. As a herbaceous perennial it dies back in winter producing new spring leaves and early summer flowers. 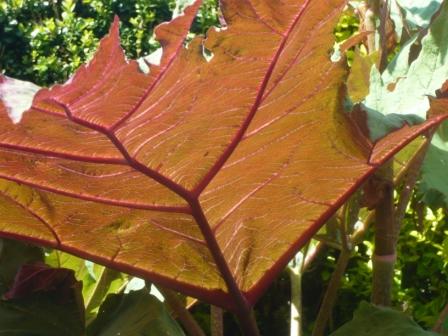 You often find Rheums planted near to water. They grow rapidly and need the damp conditions to thrive.

The pebbles above are being used as a mulch and the Rheum crown is growing through the covering in early spring. I hope to photograph the plant later in the year and see how it has done in the hot spot where it is planted.

Rheum palmatum Atrosanguineum is suffused blood red and can be used as a ground cover plant in a sunny position.Â  It is best planted about 5 feet apart.

Rheum palmatum can grow up to 5 feet high and has pale green, palmate leaves and crimson flowers. Rheum emodi has bronze-green foliage and purple blossoms and Rheum Alexandrae has shiny green leaves and pale yellow bracts.

According to the BBC ‘Rhubarbs aren’t just for the kitchen, and many are great fun in borders. The big asset is their large leaves though their flowers, which appear on huge spikes, are also good eye-catchers. The advantage of ‘Ace of Spades’ is that it doesn’t get that big – other kinds hit 2m and more – making it a good choice for a small garden. Its dark green leaves are roughly heart-shaped, and the tiny white flowers grow in a 1m-long vertical spray. The best site is on rich, damp ground which does not dry out in summer.’

Graham Rice at the RHS says ‘These plants have five good features: the unfolding spring foliage can be very colourful, often dark red; the mature leaves can be impressive too, especially if they retain their red colouring on the upper surface and have an attractive shape; the flowering heads can be bold and colourful; the seed heads can also be impressive; and the whole plant can make a fine and imposing specimen.’

Emerging from the herbaceous winter slumber the Rheum family look good from the first buds through leafing. The gravel sets off the colour of these young leaves and deters the dreaded slugs. The Rheum family contains about 60 species including the edible vegetable rhubarb Rheum rhabarbarum or Rheum x hybridum see gardeners tips gardeners tips or easy Rhubarb in Yorkshire .
There are now many hybrid versions of edible rhubarb and the so-called ”false rhubarb rhaponticum which is also edible.