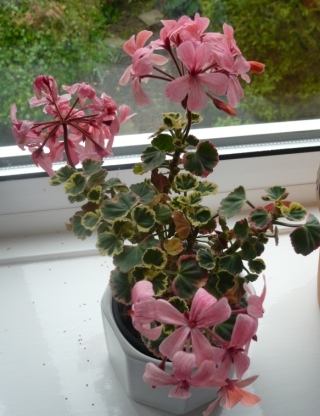 This dwarf Pelargonium (called Geranium) is shorter than a paperback (I mean not as tall) and the leaves are correspondingly small. A perfect little miniature plant with all the habits and leaf colouring of a zonal Pelargonium.

I have just bought a book on Dwarf Pelargoniums by Arthur.C.Boggis and in it he recounts the story of the first recorded miniature pelargonium. ‘In the middle of the 1850’s, a coal miner who lived in Derbyshire who was a great enthusiast of Pelargonium’s, planted his garden in late May. …He then had to spend the next few months in his bed due to illness and it was not until mid September that he was able to get out and look around his garden, which had suffered badly due to neglect and the effects of a dry hot summer. Many of his plants had died but looking at what was left of his Pelargonium’s, he was mystified about one plant, normally a bright red zonal with very dark green leaves.
This plant he found had shrunk to a small size, but still seemed to be thriving. From cutting’s he showed to a friend, a local nursery owner, they grew as many as they could for the next year. They gave the plant the name “Red Black Vesuvius”, and they went on sale to the public for the first time in 1858. This was the birth of the first miniature. ‘

Try growing them yourself and who knows we may meet at a show on some future occasion.

Other links and information on Pelargoniums

3 thoughts on “Dwarf Pelargonium aka Geranium”