Hay fever and Asthma attacks can be brought on by Scented Plants as well as pollen or Fungal Spores. Histamin problems can also be exacerbated by scent and smells in the garden. Tips to cut Spores and Fungus

Scented Plants are generally pollinated by insects feeding on the nectar. This can include wasps and bees so if you are allergic to stings avoid such plants. Some people are sensitive to a range of smells and perfumes or just the scent of one plants such as a lily or honeysuckle and in this case choosing plants for a garden can be an issue.

Some top tips from the Asthma society of Ireland for creating an allergy friendly garden include;

1. Choose plants that are pollinated by bees, the pollen is heavier and sticky and therefore stays on the bees rather than floating around the garden.
2. Avoid wind pollinated plants which disperse copious amounts of pollen into the air.
3. Avoid plants which are intensely fragrant as they can be a trigger for allergies and asthma.
4. Choose female plants, as they produce no pollen. Sterile male plants are also a good choice.
5. Grass is a major pollen producer so mow your lawn regularly, before it flowers.
6. Wear a mask when mowing lawn or trimming hedge.
7. If possible replace your lawn with gravel
8. Replace organic mulches with inorganic mulches
9. Avoid ornamental grasses in your planting schemes.
10. Remove hedges which harbour dust, pollen grains and mould spores which can trigger asthma and allergy symptoms.

Allergies can be exacerbated by plants just ask a hayfever sufferer. Pollen and strong scent often combine together and beware of allergic reactions to your garden plants. 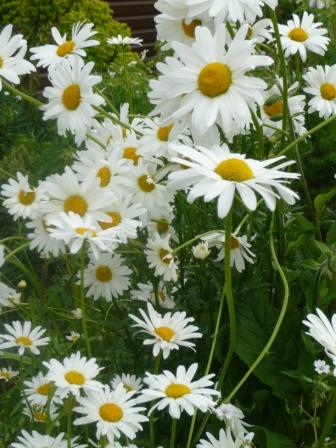 Plants to be Wary Of

Asthma sufferers often complain that it is the scented garden plants that bring out the condition.
Generally it is the heavily fragrant flowers but sometimes it is a single species such as Honeysuckle that cause the problem.
Lilies like the Lilium Regale are one of the best scented flowers but one of the worst culprits for allergies.
The Dianthus family of Carnations, Sweet Williams and Pinks with a spicy scent are known to bring on hay fever.
Although generally unscented, many flowers from the Asteraceae or Daisy family seem to be allergenically toxic to many people. If you suffer then it is best to exclude members of this large family including Asters, Chrysanthemums, Marigolds and other similar looking flowers.
Avoid ornamental grasses heavy in pollen. Allergic advice from Thompson Morgan
If you have hay fever, asthma or severe allergies, you should avoid eating flowers of the daisy family because they could trigger an allergic reaction. Take care when choosing a location for mushroom growing as some people are allergic to mushrooms or mushroom spores and others may become sensitised by high concentrations of spores.

If you want to walk around your garden in a summer evening and take in the scent then consider some of the following recommendations.

I have had a disaster this year with my sweet peas sown last Autumn. They didn’t fare too well in the cold greenhouse. I gave them a long root run but probably didn’t give them consistent watering and TLC. So by spring they were thin specimens with lacy leaves eventhough I had pinched them out. Because they didn’t look too good I didn’t feed them up and cosset them but just plonked them in the ground. Well it serves me right and I have a very poor showing at the moment.

Next year will be different and I have already made plans and placed an order for 36 plants from Unwins ‘Super Fragrant Collection’. which consists of Heathcliff, Bobby’s Girl, Valentine, Southampton, Scartlett, and Lively Lassie. I will take delivery in March or April 2009 of healthy plants grown by a nursery. As I have paid good money for them I will take great care, prepare the ground and look after them. Hopefully we will get the sun to make them excel.

Unwins are Sweet Pea specialists and the plant collections I could have chosen include Showbench, Cut flower, and Mixed unnamed collections. They also do plentys of seed varieties and mixes. So for me next season it is plants over seeds (but may be I will do some seeds as well). I am not yet ready to join the National Sweet Pea society but if I do well with my plants I may well do so What is your favourite smell in the garden? Crushed herbs of Rosemary and Lavender or newly cut grass perhaps. Well by the end of June we will publish a list of the most popular varieties of scented flowers. Here are some of the best plants with scent that we will track down to individual types and varieties in a league table of popularity. What will be in your premiership selection? We will try include your favourite aromatic or powerfully pungent plant in the league tables.

Quick Tips for a Fragrant Garden

Originally entitled ‘Why do white flowers smell best?’ I have revised this article. 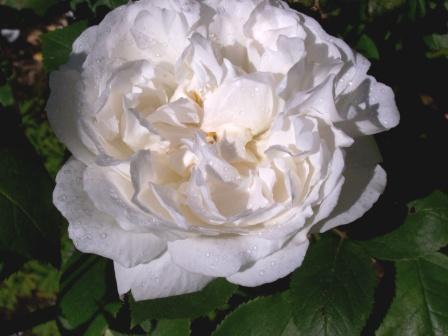 Can you see a smell?

The scent from this rose should be pulsing through the internet in waves of perfume. It certainly pulsed through the RHS garden at Harlow Carr with a far spreading aroma. The light rain (well it is an English rose in an English summer) probably enhanced the sweet scent as the fragrant oil was dissolved and let loose. Moss roses have furry growths which at a glance look like aphids but are in fact oil glands that provide fragrance.

White flowers attract pollinating insects, butterflies and sometimes birds by the scent and source of nectar. They do not use colour for obvious reasons. For this reason white flowers in a species are often far more scented than coloured equivalents. Some of the most scented flowers are white including Philadelphus, Lily of the Valley and members of the Rose family. Is aesthetics a sixth sense? If so Gertrude Jekyll had it in abundance. Gertrude created over 400 gardens and first published her work on colour schemes over 100 years ago.
If aesthetics are a combination of all the senses including the common one then I would be hard pushed to say which was the more important. Common sense is trumped in the garden by experience but sight and smell are the top drivers of appreciation. END_OF_DOCUMENT_TOKEN_TO_BE_REPLACED

Thyme has over 350 varieties and can make an interesting collection. Thymus is claimed to have volatile oils that have anti-ageing properties and good anti-oxidants to aid health. It retains its flavour after drying and can be stored successfully.

Time for some Growing Tips on Thyme Abeliophyllum distichum also called White Forsythia is more refined than traditional yellow Forsythia to which it is distantly related, both being part of the Olive family.

Abeliophyllum distichum roseum group is the seldom seen pink form. According to Junker’s nursery ‘It is sometimes called “Pink Forsythia” but this reflects more its time of flowering than either its colour or parentage! A very pretty plant that stays quite small, rarely more than 3 feet tall’.

END_OF_DOCUMENT_TOKEN_TO_BE_REPLACED

It is the scented leaves of Pelargoniums rather than the flower that attracts growers and collectors. They are often used in scented gardens for the blind but are useful in a normal garden border where they may be brushed or touched. As indoor pot plants they are ideal as living pot-pourri and may be hybrids or species in their own right.