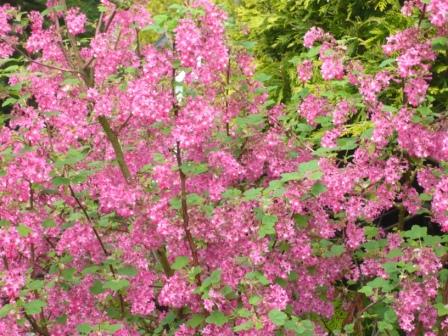 In my garden the flowers of the flowering currant are over for another year so this morning I started to prune the shrubs. The lobed leaves of the Flowering Currant are seldom of special merit although they look lime green fresh at the moment. Therefore I am happy to prune very hard immediately after flowering.

If you want to grow more plants stick some of the pruned branches into the soil in an out of the way spot and chances are good that several will root. I try get a cutting 6+ inches long with a bit of the older wood as it breaks in to new wood,  I strip off the leaves for the first 4 inches or so and plant in normal soil with no special effort.

History from The Daily Mail

‘The pink flowers of the flowering currant are so common that we tend to take them for granted. But its discovery by David Douglas in 1825 in what is now the US state of Oregon is part of an epic and grisly botanical tale.
If anyone is the model for Indiana Jones, it is Douglas. The Scottish botanist crossed snowy mountains, rivers and heat-baked prairies in the process of discovering over 200 species, including the Douglas fir and Mahonia aquifolium.
He had been dispatched by the newly founded Royal Horticultural Society to collect plants for their gardens in Chiswick.
After a number of trips, each involving clashes with native Americans, Douglas came to a ghastly end. He fell into a pit set to trap wild cattle and was gored to death by an animal already captured.
So behind the humble and frankly rather ill-smelling flowering currant is a story of bravery and dreadful death.’