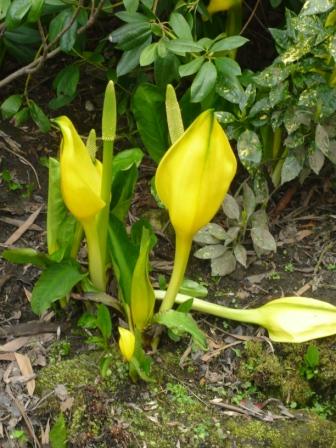 American Skunk Cabbage Lysichiton americanus is planted in groups along the streamside at the Valley Garden Harrogate. Over the years the plants have seeded themselves freely and now make a fantastic display covering the full length of the stream and beyond. The yellow flame-shaped flowers really called spathes, are 18 inches high and look magnificent reflected in the water in April and May. Then the flowers are followed by enormous paddle-shaped, leathery green leaves which remain until dieing back in autumn.
Lysichiton camschatcensis has a hypnotic white spathe and lime green flowering head and a cross between the two species produces a cream spathe (I like to call a spathe a spathe). This spathe surrounds a cigar shaped stem called the spadix which bears many small, bisexual green flowers. 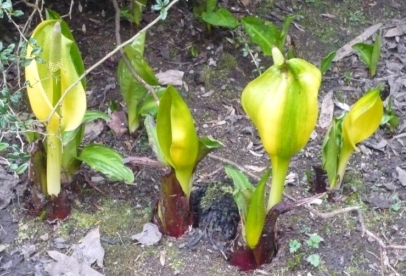 The name Skunk Cabbage is a reference to the strong scent the flowers emit to attract pollinating insects early in the season. Lysichiton americanus shown above has an RHS AGM.

3 thoughts on “Skunk Cabbage for the Waterside Lysichiton americanus”