Rustle up some space for Lupins a grand perennial favourite. Originally Lupins (Lupinus polyphyllus) were introduced into Britain from North America in 1826. They had the blue flowered spikes we occasionally saw on railway embankments with some whiter flowers. Fast forward to 1937 and the RHS awarded its highest honour to a ‘ jobbing gardener’ George Russell for developing a strain of Lupins that caused a sensation. Russell developed his Lupins by rigorous selection of seedlings, aiming and achieving a central stalk or spike totally obscured by colourful flowers. Many of us would cut back Lupins after flowering to prevent the setting of seed and weakening the plant, but to George Russell that was the opposite of his intent. 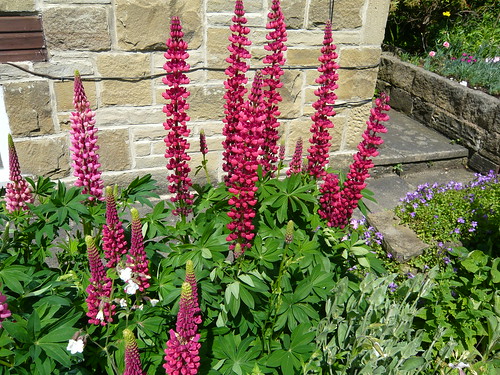 Red Lupins in my garden.
Below are some of the Lupins you can now grow. These were exhibited at last years Chelsea Flower Show. Lupins are available as plants or seeds from Thompson Morgan