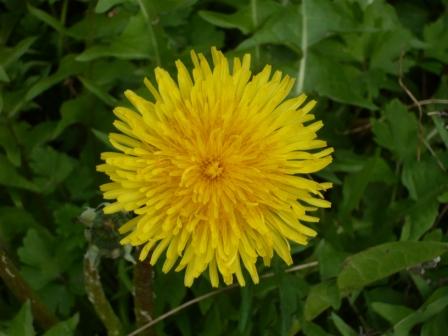 What is wrong with the humble Dandelion and why do we take against it so? The flowers are prolific, uniform with good and vibrant colour. The seed heads look light and airy before the Dandelion Clock strikes and blows all the seeds to germinate where they will. The leaves are lance-shaped, so deeply toothed, they gave the plant its name in Old French – Dent-de-lion means lion’s tooth. So is it the profligate flowering, the ability to seed so freely the French Connection or some other prejudice.

My 90 year old friend always collected his dandelion flowers around lunch time of 15th May. He reckoned that was optimum flowering and picking time in Yorkshire. At least the brew would then be ready for the long winter nights if not supped beforehand.

Method
Put all the petals in a pan and pour the boiling water over them.
Stand in a cool place, cover and leave for a full two weeks. Stir each day. At the end of that time, pour the dandelion liquid through a muslin cloth to strain.
Add the sugar to it and stir until dissolved.
Rinse the orange and lemons slice and put them and ginger in the liquid.
Pour the wine into a pan and bring to the boil. Simmer for 1/2 hour.
Allow to cool then spread a little yeast on a slice of toasted bread and put this into the liquid. –
Cover the pan and leave for about 4 days. Strain the wine.
Store in a demijohn for 3 to 4 months until fermentation finishes then bottle for use.