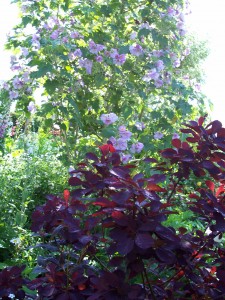 This Abutilon is virtually an evergreen keeping most of its leaves through a mild winter. The June and early summer flowers are numerous and white, deep blue or like this a paler mauve. There are 150 species of Abutilon with common names including, Chinese Bell Flower, Chinese Lantern, Mallow, Indian Mallow, and Flowering Maple.

This tree is at its maximum around 18 feet tall and has three main stems naturally branching out from about a foot high. The grey-green leaves contrast with the purple Cotinus coggygria Royal Purple in the picture.

This winter I lost one specimen that was in the most sheltered spot but I had pruned it a bit hard. Several others survived and are flowering very well at the moment. All were grown from seed and flowered in the second and subsequent years creating a talking point as people walk past in deed I have given away numerous seeds which are produced prolifically and retained on the tree in spiky circular pods. Other forms of Abutilon include the vareagated hybrid above. You can also buy seeds to grow Abutilon as indoor flowering house plant. The compact, dwarf plants of Abutilon Bella Mixed have large, showy 3 inch bell-shaped flowers and multi-lobed leaves resembling a maple tree.

One thought on “Abutilon Hybrids and Abutilon Vitifolium”