By hortoris on September 3, 2019 in Books on Gardening & Gardens, Garden Visits

You are unlikely to be able to recreate the conditions and zones of Hawaii in your garden but you can still gaze at some of the exceptional plants and study their habitats. Isolated by thousands of miles of ocean for millions of years, the Hawaiian islands are home to many unique plants and flowers described with great photographs in this book This book describes more than 130 indigenous (originating or occurring naturally) and endemic (native and restricted) species of many unique plants and flowers. If you are lucky enought o visit one of the many volcanic islands of Hawaii get out and about to visit different ecoregions and botanical sanctuaries. If you stick to coastal and tourist areas you will miss a brilliant and unique horticultural journey. If you can’t visit you can still wonder at the photographs and reports of others that I have hinted at. ‘What else did the Romans do for us’ asks Monty Python. ‘All right, but apart from the sanitation, the medicine, education, wine, public order, irrigation, roads, a fresh water system, and public health, what have the Romans ever done for us? ‘ Well if you include Latin as a language they gave us modern gardening nomenclature.

What can Latin Names Tell Gardeners

So Monty Python was on the right lines but ‘he is a very naughty boy’ of he doesn’t learn some gardeners Latin.

Our transatlantic cousins still benefit from the Pilgrim fathers gardening knowledge taken to their shores centuries ago. The potato famine of 1845-50 caused Irish farmers to discover the Idaho potato. Now these and other horticultural favours can be returned by this book of organic homespun tips. On the other hand did we contribute to the Hamburger and KFC? (That is kale, fennel and cauliflower). In return we got a Turkey!

2018 has been a remarkable year for tree books and the publishing trade has done a good job listing new and older titles. There is now a forest of books to acquire and collect and I hope they have been printed on paper from sustainable sources. A ubiquitous book that has been a star seller on the shelves this year. The bright cover and eclectic mix of poems has hopefully started many saplings on a journey with trees. A compendium of National Trust History & Heritage. We can take pride in our tree history. Fascinating facts that are hard to comprehend until you study what is going on with trees in groups. A clever update of another edition, a sort of sucker from the parent tree. We are not alone in venerating trees and if you want an excuse to travel the world then this book will provide some inspiration. END_OF_DOCUMENT_TOKEN_TO_BE_REPLACED

0
By hortoris on February 14, 2018 in Books on Gardening & Gardens, My Experiences This week I revisited RHS Harlow Carr library for the first time in several years. I previously volunteered in the ‘old potting shed’  library before the new building was completed. Then I was part of the team that moved and reshelved all the books from one part of the garden to the ecofriendly new premises.

At the time of our relocation there had been a spate of thefts from the Lindley Library and some very valuable tomes had been taken. Good old artistic books with frameable prints were also susceptible to loosing pages to the ner-do-wells. So the powers that be decided to install anti theft devices in the spine of all the books at Harlow Carr. After much painstaking work we volunteers were told the exit was not compatible with the spine tags and another exit system had been purchased. As a consequence new RFID tags a couple of centimeters square had to be fixed inside all the books that already had a metal spine. Several good looking end papers were damaged or covered in this process. Imagine my ‘surprise’ (not) when the 3 books I borrowed this week were passed to my by the librarian in a way that circumvented the exit alarm because it wasn’t working properly. 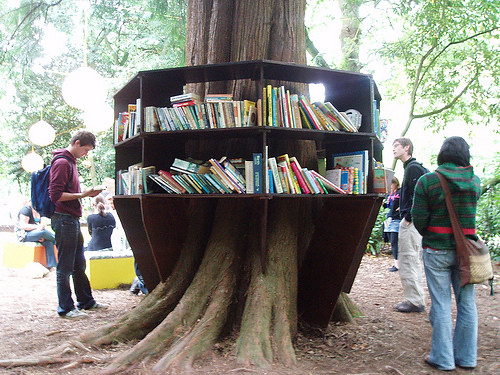 Orville Lyttle    A Tree of Knowledge? What Others Say about RHS 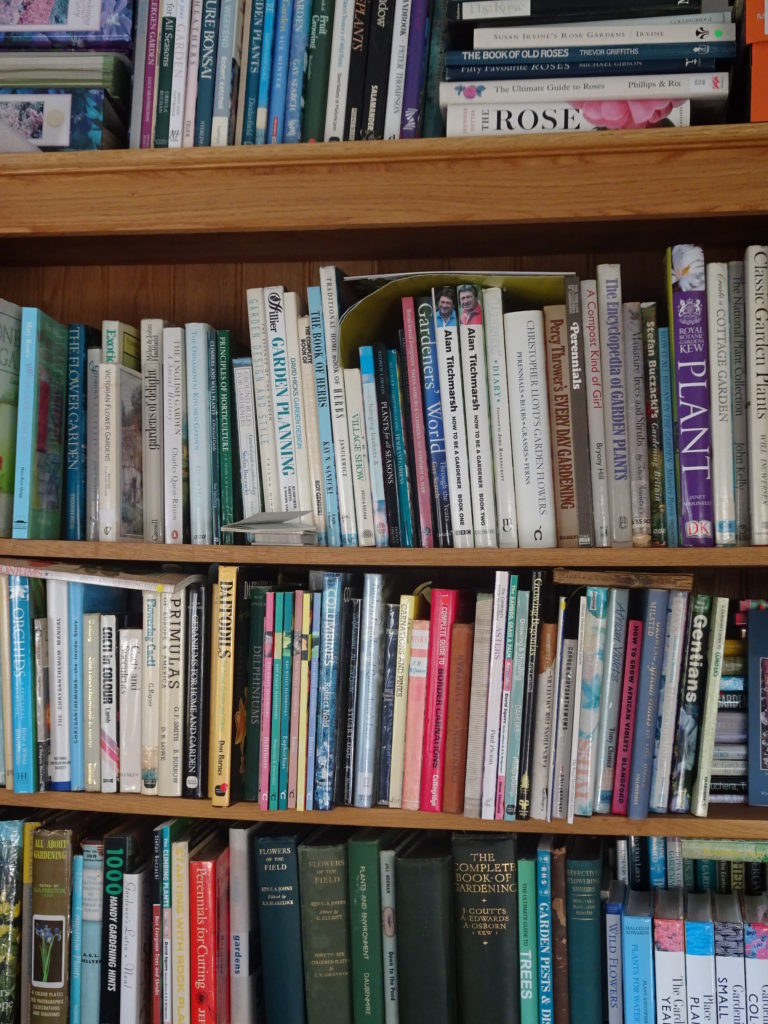 I am almost as keen on books as I am on gardening so it is natural that I should combine the two by collecting books related to gardens and gardening. The attached pdf is a cold list of my current collection by title, authors, publisher and date of publication. The extra columns were for my amusement showing the number of pages ( over 100,000) and a score that I attributed when I first browsed the book. The collection is a bit eclectic as a result of acquiring what was available and affordable at the time augmented by family gifts. Anecdotally biodynamic gardening increases yields with quality,  edible crops with a good depth of flavour. Science has not yet proved how this can be measured These guides have been published annually for over 50 years to help gardeners choose the optimum days for sowing, pruning and harvesting various plants and crops. Get help from nature – my garden needs all the help it can get and maybe just the sun is not quite enough so I’ll give the moon a go as well. Expanding into growing beyond the garden is a book that includes tips and ideas on large-scale farming,  livestock market gardening. cereal cultivation and commercial vegetable growing.

0
By hortoris on May 1, 2017 in Books on Gardening & Gardens, Novice Gardeners Advice and Pointers How to Grow Stuff

You will have guessed it – read the book!

Botany is the science of plant life. In other descriptions it is the study of plant science or plant biology. A botanist is one who studies botany.

A botanic is a drug or medicinal preparation obtained from a plant or plants.

“Botanic gardens are institutions holding documented collections of living plants for the purposes of scientific research, conservation, display and education.”

This garden, the oldest in the UK was founded in 1621 as a physic garden growing plants for medicinal research

The original Cambridge University Botanic Garden (CUBG) was founded in 1762  with the larger site opening in 1846. It provides inspiration for botanists, gardeners and the public with an array of 8000 plant species. As a university garden it has a resources for research and teaching based on a collection of living plants labelled with their botanical names. CUBG is one of 1600 heritage-listed gardens  which are based on ‘designed’ landscapes, rather than on planting or botanical importance.

Chelsea Physic Garden was established as the Apothecaries’ Garden  in 1673

Sheffield Botanic Garden has been restored  with  different garden areas with plants from all over the world, this 19-acre Gardenesque-style botanical garden is a diverse one to visit. As with other good botanic gardens it holds National Plant Collections in Sheffields case Weigela, Diervilla and Sarcococca.

Singapore Botanic Gardens founded  in 1859 has Singapore’s  National Orchid Garden holding a collection of more than 1,000 species and 2,000 hybrids of orchids

Botanic label and specimen containing the  family name Myrsinaceae, or the myrsine family and origin S W Turkey. The species name Cyclamen Cilcium, the forma as two cultivars have been named but there are many similar wild forms. The number is the accession number 4 digits show the year the plant was first acquired  then last four numbers are sequential numbers.

Myrsinaceae is a rather large family from the order Ericales, that includes Cyclamen among 30+ genera.

0
By hortoris on April 28, 2017 in Books on Gardening & Gardens, Flowers and Plants, House & Greenhouse plants

The flamboyant Hibiscus senensis is now readily available as a housplant from garden centres. This yellow flower was growing on an Italian road side.

In a conservatory this evergreen is a neat rounded shrub. Good drainage and light are required for good flowering but plants can have a very long life.

If you want to know more about the species of Hibiscus you could do worse than read a book ‘Hibiscus Hardy and Tropical Plants for the Garden’ by Barbara Taylor Lawton extracts of which can be found here. For something a bit different this book on botanic art covers some of the unusual colours from black flowers, plants and seaweed like strange green, blue and puce pink.

For more see below

Alternatively look at the illustrations in Mr Marshall’s Flower Book Books from the art world For a how too guide I am currently using this library book as my step to step guide.