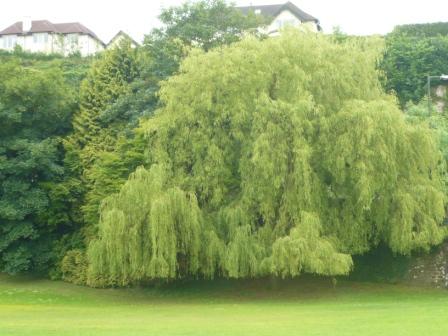 There are 400+ species of Willow tree from creeping alpines to the large Weeping Willows of river bank fame.The Weeping Willow has a short life span relative to most other species of less than 50 years and a rapid growth rate. After 20 years the typical Weeping Willow will reach up to 50 feet high depending on variety. For larger garden use ask your nursery man to help you select a restrained variety.

History -In 1908 a German nursery produced a cross between Salix alba the White Willow (a native of water meadows) and Salix babylonica grown in the UK since 1740’s.
Cuttings of single stems up to 6 feet long will root easily and most Willows cross pollinate.
Don’t plant Weeping Willows too near drains or buildings the roots are large and strong. Three times the eventual height or 30 Yards is a safe distance but if you want to avoid subsidence that is the only safe place to plant it.
Don’t prune, the shape is never quite the same afterwards but as you can see the trailing branches on this mature specimen have been trimmed neatly to the same length.
Uses for Willows include the manufacture of cricket bat blades, extraction of chemicals to make asprin and woven willow hedges and wind breaks.

Catkins are produced in spring by male and female trees with the male generally more showy. 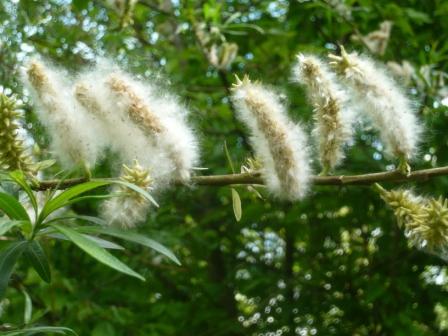 2 thoughts on “Weeping Willow in Trim”