I used to think Beech trees grew on the beach but now I know a little better but not much. This is one of the UK’s most useful trees and deserves to be grown where ever space permits.

Key Features of the Beech

Origins and Distribution of the Beech

Uses and Commercial Attributes of the Beech

Gardeners Tips for the Beech Other types of Beech and Species 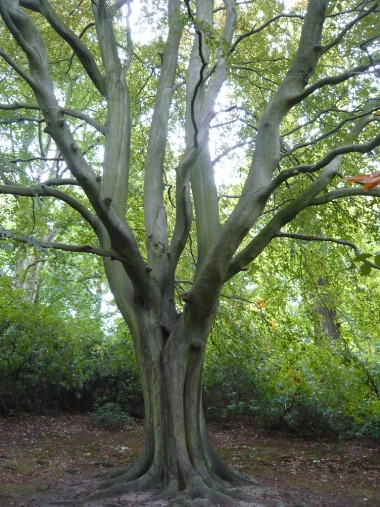 Part of a Slideshow / Set forming a virtual tour around the lake at Lake Wood, on the outskirts of Uckfield, East Sussex, England, UK. [Map]

The artificially expanded lake and woodland is adjacent to, and to the north of, West Park Local Nature Reserve. The two areas are separated by Rocks Road (the B2012 Uckfield / Piltdown road). Both areas formed part of the Rocks Estate, owned for 200 years – and landscaped in the style of Capability Brown – by the Streatfield family. A tunnel beneath the dividing road (now bricked off) enabled carriage access to the lake from Rock House.

The area has numerous Ardlingly Sandstone outcrops. Where these obstruct the path around the lake, a tunnel – and also steps leading down to an underground boat house cave – were excavated.

Lake Wood is managed and protected by The Woodland Trust