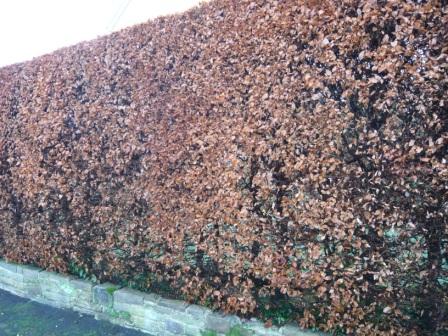 Copper beech is not copper coloured until autumn when the leaves turn to a burnt brown colour. There are green leaved beech hedges and purple leaved copper beech. The leaves stay on the tree until spring when new buds are fit to burst.

Reg was a lonely glow worm,
All alone in the big city night;
Lady glow worms didn’t like him,
Never really thought him too bright.

She was just a red glow in the gutter,
Alone, perhaps lonely like him;
His heart simply melted like butter;
Her light made all others seem dim.

But tonight he would not be requited;
Her warm love could never be Reg’s
For he was a lonely glow worm
And she was a Benson and Hedges.

He asked did she come here often,
Asked if she fancied a drink;
She might perhaps like a light ale;
No reply; not a nod; not a wink.

She was just a red glow in the gutter,
Smouldering; sultry; aloof.
Not one single word did she utter,
And Reg never guessed at the truth.

His heart was aflame with desire,
But her fire was a pyre; it was Reg’s;
For he was a lonely glow worm
And she was a Benson and Hedges.

He desperately wanted to know her,
There in the big city night;
And there, like a moth to the flame,
Reg was drawn to the light.

She was just a red glow in the gutter,
A beacon of love in the mist;
She lay where some smoker had put her
And Reg could no longer resist.

He burned more than his fingers that evening;
Now he carries a torch with scorched edges,
For he was a lonely glow worm
And she was a Benson and Hedges.

>He fell like a fool for a cigarette,
For passion can have strange effects
And his contact lenses were missing,
And a tortoise had trod on his specs.

She was just a red glow in the gutter,
Unmoved by wit, wisdom or wealth,
Sat a firefly on fire and a-flutter
And seriously damaged his health.

All she left was a small pile of charcoal;
Remember those embers are Reg’s,
For he was a lonely glow worm
And she was a Benson and Hedges.