Collectors of Snowdrops are named Galanthophiles so should crocus lover be called Iridiaphiles. Perhaps there are already Iridiaphile clubs collecting the numerous Crocus species including the Corsican Crocus shown above. Wikipedia list 80 plus species.

0
By hortoris on February 22, 2010 in Flowers and Plants, Novice Gardeners Advice and Pointers These short tips are designed to help you avoid failures and give you success without having to worry about too many rights and wrongs. You haven’t missed spring yet but to get going you need a quick win!

It is hard to go wrong with bulbs. (The flower is already sealed within the bulb and they just need a bit of help and protection from you).
In February you can buy pots of daffodils, tulips, grape hyacinth and crocus that have been grown for you. It is easy to put them into bare soil, a container or bigger plant pot and wait for them to flower.
I would take them out of the retailers pot as they will have been grown tightly packed together but I wouldn’t try to separate them. Plant them at the same depth as they have been grown so you do not need to excavate a deep hole.
When planted in the ground or a new container water them gently.
Daffs and crocus will flower again next year but the tulips may not survive (it won’t be your fault, it is just nature) END_OF_DOCUMENT_TOKEN_TO_BE_REPLACED

0
By hortoris on February 11, 2010 in Novice Gardeners Advice and Pointers

What is a Corm?
Corms are (underground) stems that are internally solid tissues with a fibrous outer. This differentiates corms from bulbs, which are made up of layered fleshy scales that are modified leaves. As a result, when a corm is cut in half it is solid, but when a true bulb is cut in half it is made up of layers. The Corm is the food store for the next generation of plants.

Crocus and Gladioli are two of the best known plants grown from corms. Also Cyclamen, Bananas, Diermia, Crocosmia, Liatris and Freesia are corm based plants.

Roots growing from the bottom of the corm are normal fibrous roots are formed as the shoots grow. The second type of roots are thicker layered roots that form as the new corms are growing, they are called contractile roots and they pull the corm deeper into the soil.

Corms of some species of plants are replaced every year by the plant with growth of a new corm at the shoot base just above the old corm. As the plants grow and flower, the old corm is used up and shrivels away. The new corm that replaces the old corm grows in size, especially after flowering is done.

Corms can form many small cormlets called cormels at the base of the plant and these can be grown on for subsequent seasons. They grow true to the parent plant and are a way of increasoing stock. A corm can be cut into wedges and grow a new plant as long as there is a bud on each part. This is our selection unless you know better – if so let us know. Check for open days in February and March for a day out to enjoy. You may also find snowdrops in unexpected locations. I snapped these pictures in Haworth church Bronte land. Snowdrops in an alpine house at Harlow Carr. After seeing Naked Ladies at Harlow Carr gardens in Harrogate I decided to plant some Autumn crocus for myself. The blue Crocus speciosus were planted under some rhododendron shrubs and the colour has been a good strong blue. The corms would have flowered without being planted so it is little to do with the peaty soil but hopefully the leaves that follow the flowers will now help bulk up the Crocus for future years.

The blown flowers on the pink crocus were from far larger bulbs. As you can see they are too near the surface but many Crocus have the ability to use their roots to pull the bulbs deeper in to the soil. I will not be disturbing them to find out. I will cover with some more soil if only to deter mice from eating the bulbs.

Even now if you find bulbs on sale or special offer it may be worth buying some of these interesting bulbs. 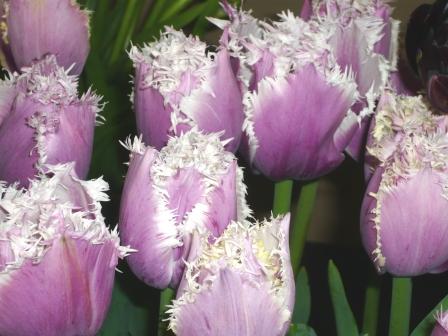 Tulip Crispa or the fringed Tulips looked really good at our Spring show so I have planned to grow some next year. These photos were taken on the bench demonstrating what good cut flowers Tulips can be. The fringed or lacerated petals are unusual yet elegant and add to the attraction of these strongly coloured flowers.